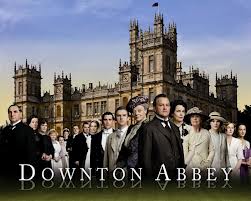 I’ve become addicted to Downton Abbey.  Julian Fellowes, writer of the mini-series, has been criticized for stereotyping the characters in this drama.  Perhaps the critics do not think the characters are real enough: too rich too poor too this too that.  I once had a writer tell me that there is a bit of stereotype within every character.   I at first discounted this idea, but now I understand the reality behind this truism.  Art needs to stand out from real life.  If characters become too real they blend into the everyday.  They must stand out.  They must have a back-drop to emerge from.

English country house life is something that interests me.  Not only do I soak up every creative detail from Fellowes’ series, but I think of how things have not changed so much from this time period, early 1900’s English country house life, from Shakespeare’s time.  I  think not only about the history but also the psychology.  The relationships between people.   Traditional history has been sorely lacking in this approach.  Revisionist history is helping to slowly correct this problem and needs to be applied to the realm of Shakespearean studies.

Because, quite frankly, there is very little evidence for the traditional Shakespeare, aka the man from Stratford.

It seems the rage lately among Stratfordians to reject alternative histories.  They feel the need to sit on their version of history like a jealous goose guarding her eggs.  When the movie Anonymous came out they became utterly irate.   Hissing and biting…oh my.  How dare anyone consider another alternative.  Even if there is good evidence contrary to their dogmatic suppositions.

But Shakespeare wrote fiction.  In fact I think Shakespeare would have been quite pleased with alternative history and fictional versions of it.  He did write quite a bit of it.